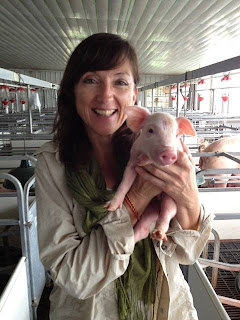 Check out this photo of Donna Svanberg of Capitol Productions, Australia, on site filming in The Philippines.
Donna headed the 2013 judging committee for FilmFest One World Award, sponsored by the International Quorum of Motion Picture Producers. IQ recognizes a production that fosters world understanding. The winner will be revealed soon. www.filmfestawards.com
http://www.capitolproductions.com
http://www.iqfilm.org
Posted by FilmFest Staff at 5:06 PM 1 comment:


WRG Qatar, Doha, has won a Gold Camera Award in Specialty Production and a Silver Screen for Editing for the film "COP18/CMPS Climate Change Conference." The awards were  announced in July by US International Film & Video Conference for its 2013 competition. Only 18 Gold Camera Awards were given.
The widescreen film was done for The United Nations Framework Convention opening on Climate Change. The filming crew faced special challenges to accomplish the task. Since the head table and lectern had to remain onstage at all times during the conference opening, WRG created a 25-minute centerpiece film focusing on individuals from around the world who are fighting climate change.
WRG had five weeks to research, shoot and edit the film, which involved 36,183 miles of travel across the Maldives and Madagascar, Germany and the UAE, New York and Qatar.  Middle East Event Awards last night, winning two prestigious awards.
The production also won Best Meeting or Conference from the Middle East Event Awards in Dubai. WRG is headquartered in Manchester, England.
The US International Film & Video Festival competition has been held since 1967 and recognizes outstanding Corporate, Education, Entertainment, Documentary and Student productions. Entrants from 22 countries received 113 awards in the 2013 US International Film & Video Festival. Overall entrants came from 24 countries.
Full details on winners are posted at www.filmfestawards.com.

Posted by FilmFest Staff at 12:12 PM No comments: