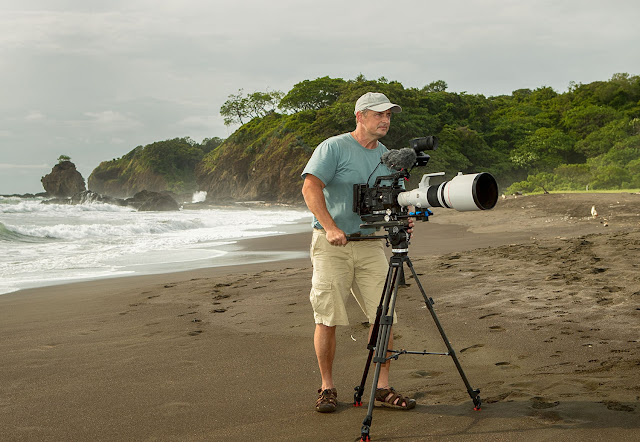 For 2019, US International Film & Video Festival welcomes three first-time members to its jury panel. Libor Spacek, a director and cinematographer from Prague, joins California producer Chris King and Canadian producer-consultant Marie Natanson. All come with a string of  awards of their own.
Spacek (pictured above) has some 80 awards for documentary, short film and photography shot throughout the world for an “Escape to Nature” film series. His latest “Escape” documentary series underway is “Escape to Pacific,” to be photographed in remote Melanesia islands.
He founded “Escape to Nature” with Petra Dolezalova, who like Spacek is an experienced diver and photographer. Their work is published on www.escapetonature.com.eu and in travel magazines as well as in TV broadcasting in the Czech Republic and abroad. The nature work not only shows the beauty of nature but also its “fragility,” which Libor and Petra consider their contribution to the preservation of the planet.

Underwater fine art
In addition to nature photography, Libor is founder, director and photographer of a photography company specializing in fine arts-fashion and underwater photography. His photo collection “Underwater Fine Art Nudes” has had wide appeal.

Does screenplays and film
Chris King is a three-time NorCal Emmy nominated producer in the The San Francisco/Northern
California Chapter of The National Academy of Television Arts and Sciences competition. His screenplays have received attention in The Nicholl Fellowship, the Chesterfield Film Project, Fade In Magazine and HBO’s Project Greenlight. His films have played at more than 225 film festivals in over 90 countries and have received over 100 awards and nominations.

Chris's short film "Birthday" qualified for the Academy Award (Live Action Short) in 2017 and played in more than 150 international film festivals. He just completed a short narrative film "Pipe Dream” on the early days of Carol Burnett. Chris and his co-producer/co-writer wife Heather reside in Roseville, Calif., with their two daughters.

Story editing part of  resume
Marie Natanson of Toronto is an independent producer and consultant whose most recent projects include mentoring and coaching Canadian directors for On Screen Manitoba in 2016 and the Italian delegation at Hot Docs, TIFF and the Rome Film Festival in 2015.

Marie worked as a story editor on such films as “This is my Land…. Hebron,” which won Best Italian Documentary at the Festival dei Popoli and Festival International du Film des Droits de l’homme (Paris).  Working with 40 broadcasters, she assisted in the global launch to 200 countries of the award winning series “Why Democracy?”

Marie previously was executive producer of the Independent Documentary Unit of the Canadian Broadcasting Corporation where she commissioned and co-produced films that won awards including four Geminis for Best Documentary Series (aka as the Canadian Screen awards), five Emmys, two Peabodys and numerous Best Feature at Hot Docs. Before joining the Documentary Unit, Marie was a Senior Editor on CBC’s flaghship daily current affairs program, “The Journal” where she directed documentaries in Canada, the U.S., Europe and the Middle East.


Posted by FilmFest Staff at 7:14 AM No comments: