Australians won three awards in the 2017 US International Film & Video Festival. A Children’s Television show won a Best of Festival award and a Gold Camera first place award. A Silver Screen award went to a second work, by MindConsole, Sydney.

The Australian Children’s Television Foundation sponsored the Best of Festival-Entertainment work, "Little Lunch – The Nightmare Before Graduation," based on books written by Danny Katz and illustrated by Mitch Vane.  “Little Lunch” refers to a morning tea break, and the shows tell about funny and touching adventures that happen during that 15-minute period.

Gristmill, Melbourne, was the production company for the TV segment with Robyn Butler, Wayne Hope and Ben Grogan as producers. Butler also directed.

The MindConsole award was for "Pernod Ricard Winemakers," which featured the different winemaking regions and how they are woven together. Sarah Descher headed the project for Pernod with Markus Karlseder as producer and Benjamin Shepherd as director. Cinematographer was Benjamin Shepherd with Dominic Dimech as editor.

Entries from 25 countries competed in the festival's 50th year. Find more information about winners at www.filmfestawards.com.
Posted by FilmFest Staff at 9:20 AM No comments: 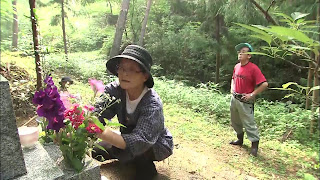 The shortlist represents works as broad as a look at the Chopin piano competition and insight into the aftermath of a nuclear plant meltdown or life for two elderly Japanese who shun modern conveniences.

Videos and/or photos of the nominees along with Gold Camera, Silver Screen and Certificate winners can be viewed at www.filmfestawards.com.

Best of Festival winners and the recipient of the One World Award presented by the International Quorum of Motion Picture Producers will be announced June 21.
Posted by FilmFest Staff at 6:54 AM No comments: